SportsPulse: Everything points to Zion being a generational talent but there are parts of his game that still need work. HoopsHype’s Alex Kennedy dishes on the questions he still needs to answer.
USA TODAY

Whenever an NBA team has a lottery pick, it can signal hope and optimism for a franchise in need of a turnaround.

But much of that fate can be contingent on the caliber of talent in that year’s class. Some years, there’s a Zion Williamson-like sweepstakes. Other years, like the 2013 draft, there’s only one future All-Star among the top 10 picks.

That was Victor Oladipo, if you’re wondering.

Since 1947, some of the sport’s all-time greats have gained entry to the league through the draft. But it’s the classes with multiple Hall of Famers that stand out as the best drafts.

How will the players whose names commissioner Adam Silver calls out in Thursday’s draft in New York (7 p.m. ET, ESPN) measure up as a draft class? Only time will tell.

USA TODAY Sports takes a look at some of the best draft classes in league history. Also, don’t miss our mock draft. 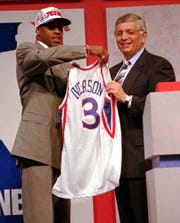 Allen Iverson holds up a jersey with former NBA commissioner David Stern after being selected as the top pick in the ’96 NBA draft. (Photo: Associated Press)

This class was stockpiled with future All-Stars, including eventual MVPs in Iverson, Bryant and Nash. Iverson won rookie of the year, while a then- 17-year-old Bryant eventually transformed into a five-title Hall of Famer. Nash proved plenty of doubters wrong during his HOF career. Allen also won two championships and became the NBA’s all-time leader in three-pointers. Never has a draft class had this much depth.

Remember when Sam Bowie went No. 2 over His Airness? The Portland Trail Blazers are forever crying themselves to sleep after passing on Jordan. To be fair, Jordan’s tongue-wagging greatness had yet to fully take shape after his time in Chapel Hill, North Carolina. It took him until the 1990s to win six titles and completely revolutionize the game. Olajuwon was a generational big man, while Jordan and Barkley gave us the 1993 NBA Finals — and Space Jam.

The Heatles were born through this draft class, as James, Wade and Bosh eventually teamed up in Miami for two NBA championships in four Finals appearances. While Wade peaked early (winning a 2006 title with Shaquille O’Neal) and Bosh’s career ended too soon (blood clots), James still has a few prime years left with the Los Angeles Lakers. He’s in the discussion as the best player of all-time alongside Jordan. But back in ’03 it was James and Anthony, fresh off an NCAA title with Syracuse, that rivaled Magic Johnson vs. Larry Bird.

Michael Olowokandi was the top pick in this draft and that’s still cause for head-scratching. But most of the future All-Stars this year were sleepers. Following a lockout, Carter took the NBA world by storm in a shortened season with his rim-rattling dunks for the Toronto Raptors, while Williams’ behind-the-back, over-the-head, no-look passing proved to be equally as entertaining in Sacramento. Nowitzki, an eventual MVP and NBA title winner with the Dallas Mavericks, is a sure-fire Hall of Famer, while Pierce was the frontman for the Boston Celtics’ title team in 2008.

From a depth perspective, this year’s overall talent beat some more top-heavy classes. The Admiral (Robinson) was a dominant 7-footer who eventually became an MVP (’95) and led the San Antonio Spurs to their first franchise title (’99). Pippen went on to become perhaps the greatest side-kick of all-time in Chicago alongside Jordan. Miller became one of the most lethal three-point marksmen (and trash talkers) the game has seen, with the Indiana Pacers. And point guards Johnson, Bogues and Jackson all had strong careers.